Visit all 7 New Wonders of the World 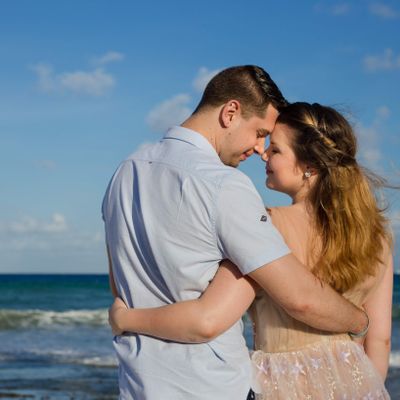 The Wonders are located across five of the world’s seven continents, from Mexico to China. And you can visit all of them just in just one month.
1. The Colosseum (Rome, Italy)
Perhaps the best-preserved of the monuments of ancient Rome, this huge marble structure was built to hold more than 50,000 spectators to witness bloody contests of might and the slaughter of wild beasts.
2. Cairo: The Pyramids of Giza (Egypt)
The Great Pyramid of Giza is the oldest and largest of the three pyramids in the Giza pyramid complex bordering what is now El Giza, Egypt. It is the oldest of the Seven Wonders of the Ancient World, and the only one to remain largely intact.
3. Jordan: Petra (Southern Jordan)
Is a historical and archaeological city in southern Jordan. Petra lies on the slope of Jabal Al-Madbah in a basin among the mountains which form the eastern flank of Arabah valley that run from the Dead Sea to the Gulf of Aqaba.
4. Agra: The Taj Mahal (Agra near Delhi, India)
It's the most beautiful building in the world, Taj Mahal is located in the historical city of Agra. Called as the "symbol of love", it was built by the Mughal Emperor Shah Jahan as a memorial for his third wife, Mumtaz Mahal.
5. The Great Wall of China (Beijing, China)
The Great Wall of China is one of the greatest sights in the world — the longest (Length: 21,196.18 km) wall in the world, an awe-inspiring feat of ancient defensive architecture.
6. Mexico: Chichen Itza (Tinum Municipality, Yucatan State)
Chichen Itza—meaning "at the mouth of the well of the Itza"—is Mexico's most-visited archaeological site, a magnificent display of the advanced civilization of the Maya people and the ceremonial center of the Yucatan.
7. Peru: Machu Picchu (Cuzco Region, Urubamba Province)
It's the one of the most beautiful wonders of the world. Perched at 2430 m, Machu Picchu is an ancient Inca fortress erected in the 15th century. In Quechua, the word "Machu" means old, while "Pikchu" refers to the top of the mountain.